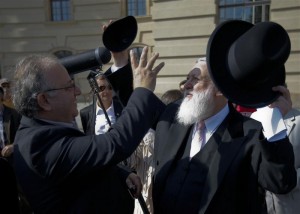 Rabbi Yitzhak Ehrenberg (R) gives his kippah to the head of the Turkish Community in Germany (TGD) Kenan Kolat during a demonstration against the controversial circumcisions law in Berlin, September 9, 2012. Berlin’s senate said doctors could legally circumcise infant boys for religious reasons in its region, given certain conditions, ending months of legal uncertainty after a court banned the practice this year. The ruling in June by a district court in Cologne outraged Muslims and Jews and sparked an emotional debate in the country. Although the ban applied only to the Cologne region, doctors across the country refused to carry out operations because of what they saw as a risk of legal action. REUTERS/Pawel Kopczynski (GERMANY – Tags: RELIGION POLITICS CIVIL UNREST)